Thoughts:  This picture book by animation character designer Carter Goodrich is a gem!  The illustrations are hilarious and absolutely delightful.  They are full of personality and perfectly depict dog behavior.  The excellent artwork partners beautifully with the tight, crisp, amusing text.  Dog-lovers and anyone who appreciates creative illustrations or just a fun story should Say Hello to Zorro!

Note:  I should admit that I am crazy about pugs, so I might be a little biased. 🙂  But, I wouldn’t be surprised if Mr. Goodrich is a pug owner himself.  He got the pug-ness just right!

Visit Carter Goodrich’s website to learn more about his art and picture books.

Check out the Jillicious Snacks: Picture Books tab at the top of the page for more of my favorite picture book titles.

Summary: Doug can’t believe his luck. As if things aren’t bad enough with a hot-headed father and a brother in Vietnam, now Doug has to start to 8th grade in a new town…. the tiny, “stupid” town of Marysville, New York. But, Doug is about to discover that there is more to this town than meets the eye.


Thoughts: Gary Schmidt’s books are all excellent, but Okay for Now is the best yet. The characters are expertly crafted and developed throughout the novel, and the 1960’s small town setting is beautifully captured. Both characters and setting are difficult to leave behind after reaching the back cover.  Doug tells the story with a realistic voice, a story that is both heartbreaking and hilarious, both harsh and hopeful. The author’s use of Audubon’s paintings to drive Doug’s realizations and growth is exceptional.  This is an outstanding novel, one of the very best of the year, and one I hope will soon boast the Newbery Medal!

Summary:  School bully Tod is in trouble, and his punishment is a month of after school detention with the guidance counselor.  Mrs. Woodrow insists that he fill several pages of a notebook everyday.  Tod insists he’s a loser, but his writing reveals something entirely different.

Thoughts:  Scrawl is a fresh, compelling narrative that pulled me in from the very first page.  Tod is not the stereotypical bully he seems to be; there are reasons he does what he does and things about his life he desperately wants to keep hidden.  Tod reminds the reader that things are not always as they appear and that we might be surprised by what we find when we are willing to dig deeper.  I LOVED this kid!  He is smart, funny & shrewd.  His distinctive voice just leaps off the page.  I felt like I knew him and really didn’t want to leave him behind when I closed the back cover.  I look forward to more from this first-time novelist.

The incredible Sarah Dessen came to the Dallas Museum of Art this week as part of the Arts & Letters Live BooksmART series. Ms. Dessen is currently on tour celebrating the release of her tenth novel What Happened to Goodbye (Be sure to read my post about this excellent new novel!).  I had the privilege of introducing Ms. Dessen before she spoke.  What an honor!  I loved the opportunity to talk about one of my very favorite YA authors and her amazing writing.
﻿﻿

The audience was great … full of teen readers who knew Ms. Dessen’s books inside and out!  I was really impressed with the quality of their questions and their knowledge of her novels.  Hands just shot up on Ms. Dessen’s book trivia questions (and the questions were not easy)!  These readers were not stumped for a moment!  And, I thought I was a fan!?!?
The best part of the day was getting to talk to Sarah Dessen for a few minutes before the presentation.  She’s such an incredible author and just a really cool person.  I’m pretty sure we are supposed to be BFFs, but I seem to be the only one who knows this.  😉  Oh, well.  A girl can dream!
Huge thanks to Katie Hutton, head of Arts & Letters Live, for this very special experience!  Now back to the books ….

I am so excited to be starting the doctoral program in the School of  Library and Information Studies at Texas Woman’s University this fall.  TWU offers an excellent program under outstanding professors.  It will definitely be a challenge, but I am looking forward to this new adventure and the chance to learn & grow. Better start shopping for some new school supplies! 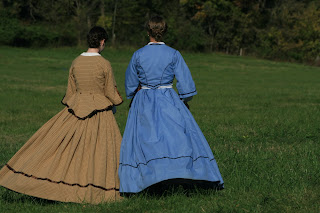 Although not the most popular genre with today’s teens, historical fiction novels have a lot to offer for those willing to give them a try.  The following titles are stand-outs in the genre because of their interesting, spunky, often hilarious main characters.  These heroes and heroines are ahead of their time and willing to travel a different path than those who went before them, both of which make for some great reading!


Catherine, Called Birdy
by Karen Cushman
Feisty Catherine (“Birdy”) journals about the dreadful suitors her father has chosen for her and her constant struggles to avoid the typical life of a medieval “lady.”


Countdown
by Deborah Wiles
Franny deals with family, friend, and school issues at the same time the United States holds its breath during the 1962 Cuban Missile Crisis.

Elijah of Buxton
by Curtis Paul Chapman
Elijah, now 11, was the first free-born baby in Buxton, Canada, a haven for former slaves.  Thought of as a “fragile” child by his overprotective mother, Elijah does a lot of growing up when faced with some difficult (and sometimes hilarious!) situations.


The Evolution of Calpurnia Tate
by Jacqueline Kelly
“Callie” is not a girl drawn to cooking and sewing; she would much rather spend her time outside exploring.  Her love for nature and science is shared by her grandfather and leads to a new bond between them one special summer.

A Long Way from Chicago
by Richard Peck (and sequel A Year Down Yonder)
Joey and Mary Alice never know what to expect during their annual summer visits to their one-of-a-kind Grandma Dowdel.


Okay for Now
by Gary D. Schmidt (companion novel to The Wednesday Wars)
Doug can’t believe when his father loses his job and moves the family to the “stupid” town of Marysville, New York.  But, the people he meets in this tiny town will make a big impact on his life that he never expected.

The Teacher’s Funeral
by Richard Peck
Russell thinks his dreams are coming true when the local school teacher dies…. but, things take a turn when his older sister is hired as the replacement!


The True Confessions of Charlotte Doyle
by Avi
Through a strange series of events, Charlotte ends up as the only passenger on a voyage from England to America.  And, the last thing this 13-year-old expects is to be accused of murder on this disastous journey!

If you want to understand today,
you have to search yesterday.
– Pearl Buck
Posted by Jill Bellomy at 9:50 PM 0 comments