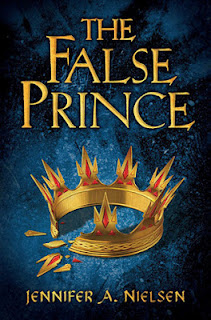 The False Prince
by Jennifer A. Nielsen
Summary: The country of Carthya is on the brink of a dangerous civil war.  A man named Connor has a plan to save the country.  To do so, he must find someone to impersonate the long-lost prince.  Sage is one of the orphan boys chosen to compete in a lethal battle to earn the place as the imposter.  His life is at stake, whether he wins or loses.

Thoughts:  The False Prince is an action-packed, highly entertaining adventure.  Sage is a delightful character – smart, snarky, and fearless.  I liked him immediately as well as many of the others in the interesting cast of characters.  The story is full of political intrigue, suspense, and action.  It’s thoroughly enthralling and the perfect start to a new trilogy.  And if you’re a fan of audiobooks, this is a perfect addition to your audio library.

Read The False Prince if you …


Visit author Jennifer A. Nielsen’s blog to read more about the Ascendance Trilogy.

Slayers
by C.J. Hill
Summary:   Tori has always had a fascination and fear of dragons.  When she learns about a dragon camp, she decides to give it a try.  Maybe she’ll find some others who share this strange obsession.  But, the discoveries she makes are beyond her wildest imagination.

Thoughts:  This book was a huge surprise to me!  I wasn’t too intrigued by the cover and so kept moving it to the bottom of my reading stack.  I finally picked it up, read a few pages, and was totally hooked!  Tori has led a privileged life as the daughter of a senator, and the other campers have low expectations for her when she arrives.  Her development is interesting and believable; the challenges she faces and the other plot twists and turns keep the reader reading!  This novel has a unique premise and offers a bit of everything … action, fantasy, suspense, and romance.

Read Slayers if you:

C.J.Hill is a pseudonym for author Janette Rallison, a realistic fiction author.  She is writing under the new name since she is now writing in a different genre.  I love that!  Visit her websites to read more about her and her writing as C.J. Hill or as Janette Rallison.

Posted by Jill Bellomy at 11:35 PM No comments: 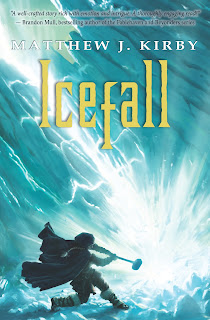 Icefall
by Matthew J. Kirby
Summary:  Solveig, her little brother, and her beautiful older sister are forced to live in a hidden fortress with a band of warriors while their father, the king, is away at war.  As winter drags on and supplies dwindle, it becomes clear that there is a traitor among them.  Solveig is determined to discover the truth before the treachery is the demise of them all.

Thoughts:  Icefall is an engrossing tale told by Solveig, a smart, interesting character.  She has always felt inferior in her family (her sister is the object of everyone’s affection and her little brother is the heir to the throne), but through the course of the novel she discovers a talent for storytelling and a new confidence.  I really enjoyed her development from insecure middle child to strong, capable young lady.  The story is an atmospheric Nordic tale complete with action, intrigue, and mystery …. a great choice for a hot summer day!

Read Icefall if you:

Posted by Jill Bellomy at 10:12 PM No comments: 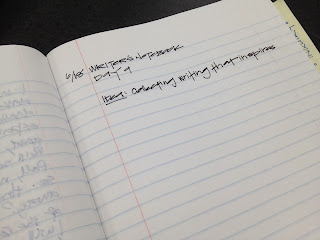 This summer I took a writing course from a National Writing Project instructor, Dr. Carol Wickstrom of the University of North Texas.  It was an intensive, 3 1/2 week class and a truly incredible experience.
As a middle school language arts teacher, inspired by the writings of Nancie Atwell and Laura Robb, I attempted to run writing and reading workshops in my classes.  I wish I had been able to take this class then!  It offers the nuts & bolts training that would have really helped me more smoothly and effectively implement the workshops with my students.
The NWP experience is also excellent for fostering growth as a writer and appreciator of the written word.  I grew so much individually through the daily writing, readings, exercises, inquiry research, demonstrations, and participation in a writing community.  Also, I learned a lot of useful teaching strategies that I will be able to implement in the library and in collaboration with teachers in my building.
The mission of the National Writing Project  is to equip educators to improve writing and learning for all.  There are sites located throughout the US that offer the training.  I would highly recommend this to Language Arts and English teachers, librarians, curriculum directors, literacy specialists, anyone interested in improving their own writing, and any educators striving to foster literacy development in their students.
Today’s students live in a digital information world.  So, writing, reading, and communication skills are more important than ever for the 21st century learner!  Here are just a few inspiring educators doing great things to this end in their classrooms and schools:
Penny Kittle, teacher, literacy coach, and author
Donalyn Miller, teacher and author of The Book Whisperer
Sarah @ The Reading Zone, high school teacher and blogger
Two Writing Teachers, two innovative writing teachers and authors who write and blog together but live miles apart!
Posted by Jill Bellomy at 4:35 PM No comments:

Last month I was able to attend the American Library Association Annual Conference in sunny Anaheim, California.  These conferences are always so much fun: time to connect with librarian and publisher friends, to meet (and stalk!) authors, and to hear about all the new books about to hit the shelves.  Here are a few highlights from this year’s conference:

Thank you to all the publishers for hosting me at the amazing events.  I can’t wait for ALA 2013 in Chicago!

Posted by Jill Bellomy at 11:49 PM No comments:

Email ThisBlogThis!Share to TwitterShare to FacebookShare to Pinterest
Labels: 2012, ALA, literary events

One of the most glorious things about attending library conferences is coming home with stacks of ARCs (Advance Reading Copies).  These uncorrected proofs are made available to reviewers, booksellers, and librarians before they are published.  It is so fun to get your hands on one of these, particularly when it’s a book you are DYING to read!  The first time I held one as a new librarian I almost cried!  (I know … total nerd.)

Here are five ARCs that are at the top of my stack (in no particular order as it keeps changing!):

Email ThisBlogThis!Share to TwitterShare to FacebookShare to Pinterest
Labels: 2012, ALA, ARCs, jillicious stacks, literary events, sequels
An Elephant in the Garden
by Michael Morpurgo
Summary: Lizzie’s mother “Mutti” works at the zoo in Dresden, Germany.  She becomes attached to an orphaned elephant named Marlene (after the actress Marlene Dietrich).  Fearing for the young elephant’s life during the war, Mutti persuades the zoo director to allow Marlene to stay in the family’s garden.  The bombing of Dresden in 1945 then forces Mutti, Lizzie, and her little brother Karli to flee the city, but they do not leave without Marlene.
Thoughts:  As friends or followers might now, I love elephants; so it’s no surprise that I was drawn to this novel.  I was not disappointed.  Inspired by true events, An Elephant in the Garden is a mesmerizing historical tale that shows the different sides and sorrows of war as well as the power of the human spirit to prevail.  The novel’s tight writing and quick pace make it very readable and interesting.  Fellow animal lover, author Michael Morpurgo offers a different type of war story by bringing together history, courageous victims, and an admiration for animals and their ability to soothe the wounded soul.
Read An Elephant in the Garden if you:

Click here to read more about An Elephant in the Garden, to find activities inspired by the book, and to learn more about the very accomplished British author, Michael Morpurgo.

Posted by Jill Bellomy at 4:27 PM No comments:

Summary:  Taylor’s family is stunned when her father is diagnosed with cancer and given only months to live.  Her father decides he would like them to spend one last summer together at their old lake house.  Taylor, who has a habit of running away from challenges, mistakes, and pain, is now forced to deal with her father’s illness as well as face old friends she wronged in the past.

Thoughts:  Second Chance Summer is a compelling teen novel with a little bit of everything … grief, growing up,relationships, and first love.  Taylor’s feelings of insecurity, fear, and not-standing-out  (even in her own family) are realistic and relatable.  Author Morgan Matson pulls the reader right into Taylor’s journey as she reconnects with her father and siblings and also faces the typical teen challenges of broken friendships and a broken heart.  Her voice is strong and funny making her a character that is easy to root for.  Add Second Chance Summer to your beach bag … along with a few tissues!

Read Second Chance Summer if you:

Click here to read more about the author Morgan Matson and her books.
Posted by Jill Bellomy at 2:41 PM No comments: